Haj Amin el-Husseini was a full partner of the Axis before and during World War II, 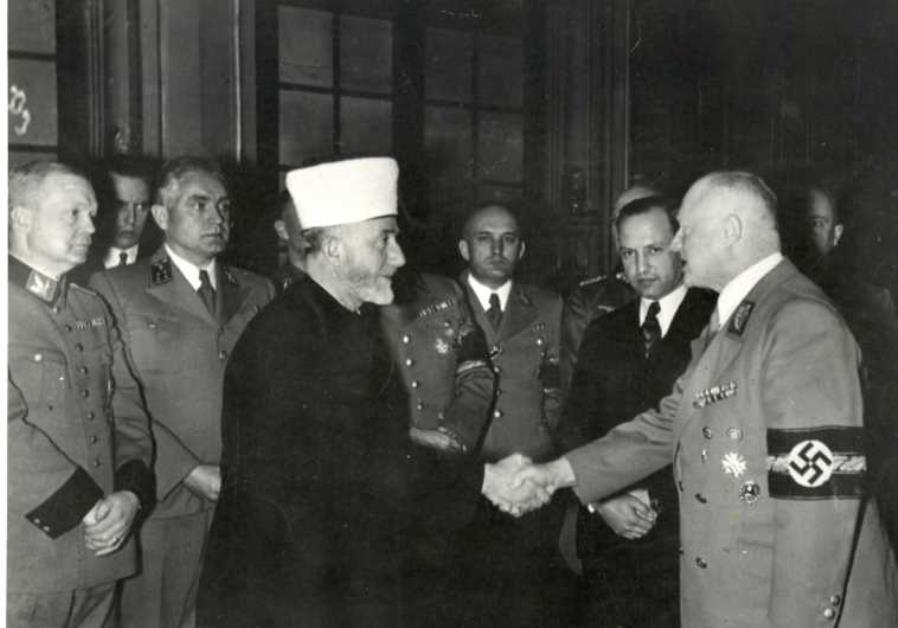 It is quite evident that those in the Palestinian Authority regard the Nazis with reverence. They are inspired by the Nazis, and want to replicate the genocide that they committed against Europe’s Jews. That is why the neo-Nazi Palestinian Authority continue to perpetuate this sick war against Israel, regardless of how many times Israel extends a hand of peace.

If you don’t believe that Rashida Tlaib and Linda Sarsour also believe that the Nazis were role models you’re wrong. Dead wrong! The Democrat Party want to reward these neo-Nazis with statehood and vast amounts of money. #Jexodus!

During World War II Al-Husseini moved to Berlin, where he was an associate of Hitler and gave active support to the Nazi war effort. Al-Husseini was on Yugoslavia’s list of wanted war criminals, and was responsible for a Muslim SS division that murdered thousands of Serbs and Croats.

When the Nazis offered to free some Jewish children, Al-Husseini fought against their release, and as a result, 5,000 children were sent to the gas chambers.

This week, on the anniversary of his death, Abbas’ advisor posted Al-Husseini’s photo and praised him as a “role model,” writing, “On this day, on July 4, 1974, the great Palestinian national leader, [former] Mufti of Palestine and Head of the Arab Higher Committee Haj Amin Al-Husseini – who for many years led the Palestinian struggle against the British and Israeli occupation – passed away; our leaders are our role models.” Below: he Mufti’s early and pre-eminent role in the Third Reich.

The captured files of the German High Command in Flansburg at the war’s end reveal that the Arab [Muslim] riots of 1936 in Palestine [Israel] were carried out by the Mufti with funds supplied by the Nazis. The report states: “only through funds made available by Germany to the Grand Mufti of Jerusalem was it possible to carry out the revolt in Palestine.” The Muslim riots of 1936 were merely a continuation of the 1929 riots that led to the massacre of 133 Jews, 239 wounded. It is apparent, early on, that the Grand Muslim Mufti meant to wipe the Jews off the map.

Haj Amin al-Husseini has a long-time record of complxity with terrorism, responsible for the Arab riots in Palestine in1920, he fled to transjordan to escape a ten year sentence of imprisonment, returning only after complete amnesty had been granted. [page 4] The Shaw Commission, appointed by the British Government to investigate
the 1929 riots, attributed to the Mufti a share in responsibility for
these riots, in which 133 Jews were killed and 239 wounded. No action
was taken to curb his activities, with the result that in 1936 he again
was responsible for new attacks upon the Jews of Palestine. At the same
time, he caused the assassination on hundreds of prominent Arabs,
including 24 leading Palestine Arabs who refused to accept his
leadership.

The captured files of the German High Command in Flansburg at
the war’s end reveal that the Arab riots of 1936 in Palestine were
carried out by the Mufti with funds supplied by the Nazis. The report
states: “Only through funds made available by Germany to the Grand
Mufti of Jerusalem was it possible to carry out the revolt in
Palestine.”

Following his excape from Palestine to Syria and later to
Iraq, he and his henchmen were directly responsible for the anti-Jewish
pogrom in which almost four hundred Jewish men, women, and children
were stabbed or brutally clubbed to death in the streets of Bagdad. An
investigating committee appointed by the legitimate Iraq Government,
following its restoration after the revolt in 1941, declared that the
causes of disturbance, “are, in the opinion of the investigating
committee, Nazi propaganda emanating from the following sources: (1)
the German League; (2) the Mufti of Jerusalem and his henchmen who
followed him to Iraq. This man was accorded enthusiastic reception in
Iraq and has turned it to his own use to disseminate many-sided Nazi
propaganda. His influence on government and army circles became so
strong that he could give orders to his group to set to work to spread
anti-Jewish and anti-British propaganda among all classes of the
population.”

In Iraq, the Mufti’s first undertaking was to organize the
Iraqi revolt with Jamal el Husseini, now Vice-Chairman of the Arab
Higher Committee, as his Chief of Staff.

After the failure of the Iraqi revolt, the Mufti escaped to
Teheran and found refuge in the Japanese Embassy. From there he escaped
to Italy. In October of 1941, he conferred with Mussolini, Ciano, and
Dino Alfieri. From Rome he communicated with Balkan Moslems under
Italian rule in Yugoslavia and Albania.

In November 1941, he went to Berlin. The Nazis established a
special office for him in Berlin entitled, “Buro des Grosmufti,” with
branches organized later in other parts of Germany and Italy. His
activities included propaganda, espionage, organization of Moslem
military units in Axis-occupied countries and in North Africa and
Russia, establishment of Arab legions, of an Arab brigade and
organization of fifth-column activities in the Middle East, including
sabotage and parachutist expeditions.

In the course of his propaganda work, the Grand Mufti had at
his disposal not only the German-controlled radio, but radio stations
in Bari, Rome, Tokyo and Athens. In addition, he was responsible for
sending to the Middle East various propaganda publications in Arabic.

His espionage service extended throughout the Middle East. He
had a sub-office in Geneva linking him to Egypt and Turkey, and another
in Istanbul, branching out all along the Syrian-Turkish frontier in
Mersine, Alexandretta, Antioch, Adana and Diarbekr. These stations
received information directly from the Mufti’s agents in Palestine,
Syria, and Iraq, and maintained close contact with members of the
German Intelligence in Turkey.

In Athens, the Mufti established a parachutist and sabotage school for Arabs.

In The Hague, under his direction, Arab students were trained
in wireless transmission, high explosives and demolitions. The Mufti’s
agents were parachuted into Palestine, Syria and Iraq. A number of them
were caught by the British. On a number of occasions these agents, with
the help of local Arabs, cut telephone and pipe lines in Transjordan
and Palestine and sabotaged railways and bridges in Iraq.

Another of the Mufti’s accomplishments was the organization
of Moslem military units. He attempted to recruit for the German
military command some 500,000 soldiers from Morocco, Tunisia, and
Algeria. In Asiatic Russia, he collaborated with Moslem Russian
Quislings and White Russian traitors whom he helped to form pro-Axis
legions.

In 1942, he started to organize Axis Arab legions from among
Arab students in Germany and Arab prisoners of war who followed him to
Germany. His Legionnaires wore the German uniform with “Free Arabia”
patches on their shoulders.

After the Jewish Brigade had been recognized by Winston
Churchill in 1944, the Mufti, on November 2, with the consent of
Ribbentrop called upon all Arabs in Germany hailing from Palestine,
Iraq, Egypt, and Syria to join the Arab Brigade.

Accepting a proposal of the Japanese that he broadcast to
Moslems in the South Pacific and India, the Mufti recorded numerous
broadcasts which were beamed to India, Indonesia and Java. The Mufti at Berlin Broadcast

On September 3, 1941, Major General Erwin Lahousen, one of the
top officials of the Abwehr, whose secret diary was among the captured
German documents, wrote: “The Grand Mufti, who left Iraq to go to Iran,
is currently in connection with the Abwehr II (Sabotage division of the
Abwehr). According to reports from Teheran he is safe with the Japanese
envoy.”

A year later, on June 2, 1942, Lahousen wrote in his secret
diary: “The Italian national, Captain Simen, took part in discussions
with the Grand Mufti concerning the utilization of the connections with
the Grand Mufti for the purpose of Abwehr II, in order to demonstrate
the solidarity of the Axis powers.”

A month later, on July 13, 1942, Lahousen made the further
entry in his secret diary: “A meeting between the chief of the Abwehr”
(Admiral Canaris, who was also Hitler’s representative in arranging for
the Franco revolt against the Spanish Republican government) ; “and the
Grand Mufti of Jerusalem took place in the apartment of the chief. I
(Lahousen) took part in the discussion. The Mufti made an offer to the
chief that the followers of the Arabian Freedom Movement, which was led
by him as well as the followers of the former Iraq Prime Minister,
Kailani (leader of the Iraqi revolt against Britain), were to be used
for purposes of sabotage and sedition in the Near East in accordance
with the purposes of Abwehr II.”

It’ s important to note that the Mufti’s weekly fireside chats were broadcast to Tokyo as well. The Mufti had warm relations with Oshima and I will have those documents posted as well.

THE MUFTI’S WWII FATWAH
AGAINST BRITAIN

In the name of Merciful and Almighty God. I invite all my Moslem brothers throughout the whole world to join in the Holy War for God, for the defense of Islam and her lands against her enemy. O Faithful, obey and respond to my call. O Moslems! Proud Iraq has placed herself in the vanguard of this Holy Struggle, and has thrown herself against the strongest enemy of Islam … The English have overthrown the Ottoman Empire, have destroyed Moslem rule in India, inciting one community against another; they stifled the Egyptian awakening, the dream of Mohammed Ali, colonizing Egypt for half a century. They took advantage of the weakening of the Ottoman Empire to stretch out their hands and use every sort of trick to take possession of many Arab countries as happened to Aden, the 9 Districts, the Hadramut, Oman, Masqat and the Emirates of the Persian Gulf and Transjordan. The vivid proof of the imperialistic designs of the British is to be found in Moslem Palestine which, although promised by England to Sheriff Hussein has had to submit to the outrageous infiltration of Jews, shameful politics designed to divide Arab-Moslem countries of Asia from those of Africa. In Palestine the English have committed unheard of barbarisms; among others, they have profaned the el-Aqsa Mosque and have declared the most unyielding war against Islam, both in deed and in word. The Prime Minister at that time told Parliament that the world would never see peace as long as the Koran existed. What hatred against Islam is stronger than that which publicly declares the Sacred Koran an enemy of human kind? Should such sacrilege go unpunished? … I invite you, O Brothers, to join in the War for God to preserve Islam, your independence and your lands from English aggression. I invite you to bring all your weight to bear in helping Iraq that she may throw off the shame that torments her. O Heroic Iraq, God is with Thee, the Arab Nation and the Moslem World are solidly with Thee in Thy Holy Struggle!

The Truth Must be Told