It is understandable why Arabs might wish to claim to be descendants of Abraham, but is there any justification for this claim?  Where did it come from?  Is it consistent with Sahih Hadiths and Islamic traditions?  How did the Arabs determine genealogies and how trustworthy are the Arabs’ genealogies?  These questions are addressed in this article.

1.  Ibn Hisham contains the first claim that I am aware of that “all Arabs are descendants of Ishmael” yet he also presents contrary claims.

Interestingly, this last claim was only associated with those from Yaman who were recognized as descendents of Qahtan. They claimed that Qahtan was one of Ishmael’s sons, yet the Bible clearly indicates otherwise.

Gen 25:13-15 KJV  And these are the names of the sons of Ishmael, by their names, according to their generations: the firstborn of Ishmael, Nebajoth; and Kedar, and Adbeel, and Mibsam,  and Mishma, and Dumah, and Massa,  Hadar, and Tema, Jetur, Naphish, and Kedemah:

2.  Even the “Sahih Hadith” collections indicate that the Arabs are not all descendants of Ishmael.  In fact, Bukhari’s collection states that Ishmael was taught Arabic by Jurhum’s descendants.  Consequently this should not be a Muslim view.

Sahih al-Bukhari, Volume 4, Book 55, Number 583: Narrated Ibn Abbas:  “The first lady to use a girdle was the mother of Ishmael. She used a girdle so that she might hide her tracks from Sarah. Abraham brought her and her son Ishmael while she was suckling him, to a place near the Ka’ba under a tree on the spot of Zam-zam, at the highest place in the mosque. … they (i.e. the Jurhum people) were coming through the way of Kada’. They landed in the lower part of Mecca … The Prophet added, “Ishmael’s mother was sitting near the water. They asked her, ‘Do you allow us to stay with you?’ She replied, ‘Yes, but you will have no right to possess the water.’ They agreed to that.” The Prophet further said, “Ishmael’s mother was pleased with the whole situation as she used to love to enjoy the company of the people. So, they settled there, and later on they sent for their families who came and settled with them so that some families became permanent residents there. The child (i.e. Ishmael) grew up and learnt Arabic from them and (his virtues) caused them to love and admire him as he grew up, and when he reached the age of puberty they made him marry a woman from amongst them.”

3.  The earliest biographer of Muhammad, Ibn Ishaq, refers to people who were not descendents of Abraham as Arabs

“when Ishmael the son of Abraham died, his son Nabit was in charge of the temple as long as God willed, then it was in charge of Mudad* b. Amr al-Jurhumi.  The sons of Ishmael and the sons of Nabit were with their grandfather Mudad b. ‘Amr and their maternal uncles of Jurhum – Jurhum and Qatura who were cousins being at that time the people of Mecca.  They had come forth from Yaman and travelled together and Mudad was over Jurhum and Samayda’, one of their men, over Qatura’.  When they left the Yaman, they refused to go unless they had a king to order their affairs.  When they came to Mecca they saw a town blessed with water and trees and, delighted with it, they settled there.  Mudad b. ‘Amr with the men of Jurhum settled in the upper part of Mecca in Qu’ayqui’an and went no farther.  Samayda’ with Qatura’ settled in the lower part of Mecca in Ajyad, and went no farther.  Mudad used to take a tithe from those who entered Mecca from above, while Samayda’ did the same from those who entered from below.  Each kept to his own people, neither entering the others territory.”  (Guillaume’s “The life of Muhammad”, pp. 45-46)

“Then God multiplied the offspring of Ishmael in Mecca and their uncles from Jurhum were rulers of the temple and judges in Mecca.  The sons of Ishmael did not dispute their authority because of their ties of kindred and their respect for the sanctuary lest there should be quarrelling or fighting therein.  When Mecca became too confined for the sons of Ishmael they spread abroad in the land, and whenever they had to fight a people, God gave them the victory through their religion and they subdued them.”  (Guillaume’s “The life of Muhammad”, p. 46)

4.  The History of Tabari claims that the first Arabic speakers were Shem’s grandchildren and great-grandchildren.  Abraham, however, was nine generations after Shem.

5.  The Arab genealogies were written over 2000 years after the birth of Ishmael, and they did not have reliable genealogies past Muhammad’s forefather Adnan.

“Ma’n Ibn ‘Isa al-Ashja’i al-Qazzaz (silk-merchant) informed us; he said: Mu’awiyah Ibn Salih informed us on the authority of Yahya Ibn Jabir who had seen some Companions of the Prophet and said: The people of Banu Fuhayrah came to the Prophet and said to him: You belong to us. He replied: Verily, (the archangel) Gabriel has informed me that I belong to Mudar.” (Ibn Sa’d, Kitab al-Tabaqat al-Kabir, Volume I, p. 4; this quote was taken from Sam Shamoun’s article “‘Ishmael Is Not the Father Of Muhammad”)

“Ibn Humayd … ‘Adnan as some genealogists assert, was the son of Udad b. Muqawwam b. Nahur b. Tayrah b. Ya’rub b. Yashjub b. Nabit b. Ismail (Ishmael) b. Ibrahim (Abraham, while others say: ‘Adnan b. Udad b. Aytahab b. Ayyub b. Qaydhar b. Ismail (Ishmael) b. Ibrahim (Abraham) Qusayy b. Kilab traces his descent back to Qaydhar in his poetry. Yet other genealogists say …” (History of Tabari, vol. 6, p. 38)

Someone perhaps realized that these numbers were unreasonable and made the following claim (without a chain of transmitters tying this to Muhammad, nor a source for this information)

“A certain genealogist told me that he had found that some Arab scholars had memorized forty ancestors of Ma’add as far as Ismail (Ishmael) in Arabic, quoting Arabic verses as evidence for this, and that he had collated the names they gave with what the People of the Book say and had found that the number agreed but that the actual names differed.  He dictated these names to me and I wrote them down.  They are as follows; …” (History of Tabari, vol. 6, p. 40)

The fellow goes on to list the names and describe some of the more prominent people in the list. (History of Tabari, vol. 6, pp. 40-42)  The list suffers credibility when one of the fellows is said to be “the father of the Jinn”

“These differences arise because it is an old science, taken from the people of the first Book (the Old Testament).” (Hist. of Tabari, Vol. 6, p. 38)

“Whenever they wanted to circumcise a boy, arrange a marriage, or bury someone who had died, or when they were in doubt as to the descent of one of them, they took him to Hubal together with a hundred dirhams and a slaughtering-camel which they would give to the custodian who used to cast lots with the arrows.  Then they would bring forward the person about whom they wished to consult the oracle and would say, ‘O god of ours, this is so-and-so son of so-and-so, about whom we wish to know such-and-such; so reveal the truth concerning him.’  Then they would say to the custodian of the arrows, ‘Cast!’  The latter would cast them, and if it was ‘attached,’ he remained as he was, linked to them neither by descent nor alliance.” (History of Tabari, Vol. IV, p. 3 [1075])

The fact that lots were cast before idols to determine genealogical information would seem to indicate that there was neither a written record nor a firmly established oral repository.

The genealogical chart below was constructed using the History of Tabari, Volume 2, and the Torah (for the descendants of Arphaxad). 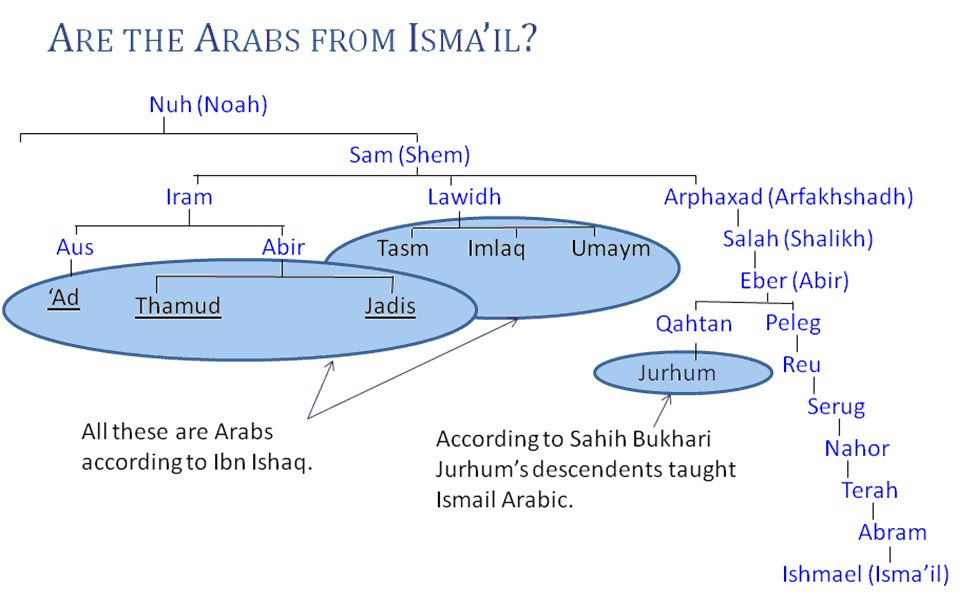 Not all Arabs are descendants of Ishmael.  Some Arabs probably are descendants of Ishmael, but it is hard to say who they are since: 1) There were no solid records; 2) Genealogical questions were answered by consulting an idol; 3) Islam’s own sources claim that Ishmael’s descendants were scattered.  4) Muhammad needed to claim a revelation to justify himself being a descendant of Mudar; 5) There exists no clear link between Mudar and Ishmael.