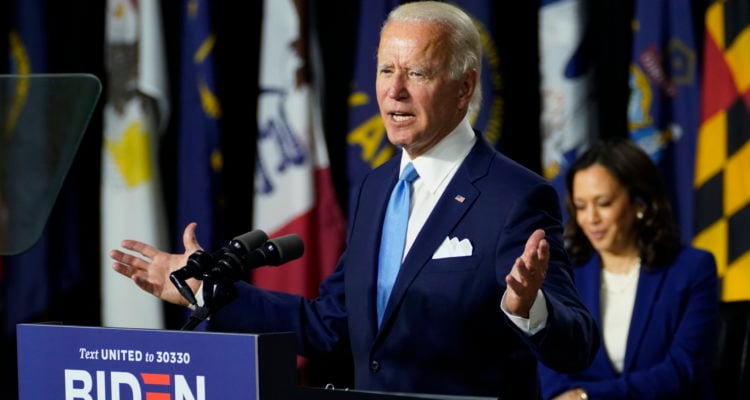 Begin famously retorted, “Do you think that because the U.S. lends us money it is entitled to impose on us what we must do?”

The story has resurfaced as the traditional three rounds of presidential debates get underway Tuesday evening with domestic policy questions, to be followed by at least one on foreign policy. That debate will undoubtedly have a Middle East component.

Biden has positioned himself as a warm friend of Israel who has always supported the Jewish State when he was a senator and then as vice president to Barack Obama from January 2009 to January 2017.

During the Democratic primaries in October, he said that even if he had differences with Israeli policy regarding the Palestinians, “the idea that I’d withdraw military aid, as others have suggested, from Israel is bizarre. I would not do that. It’s like saying to France, ‘Because you don’t agree with us, we’re going to kick you out of NATO.’”

But in 1982, during the First Lebanon War, The New York Times reported that Biden strongly criticized Israeli settlement in Judea and Samaria, saying that it had to stop. Begin’s response, which was made public by confidante Yehiel Kadishai after the prime minister’s death in 1992, showed that it had included the threat to withdraw aid.

The story went that Begin had flown to Washington to discuss the war, and was questioned by the Senate Foreign Relations Committee in what was described as a heated session that was not confined to what was happening in Lebanon.

The “bitterest exchange,” according to the Times account, was between then-Delaware Senator Biden and Begin, with Biden fiercely criticizing Israel’s settlement policy.

“Don’t threaten us with slashing aid,” Begin answered, according to Kadishai. “Do you think that because the U.S. lends us money it is entitled to impose on us what we must do? We are grateful for the assistance we have received, but we are not to be threatened. I am a proud Jew. Three thousand years of culture are behind me, and you will not frighten me with threats.”

Biden has often denied having pressured Begin in this way.

According to website Mondoweiss, former U.S. ambassador to Israel Dan Shapiro defended Biden in an August conference call with the Jewish Democratic Council of America.

Biden, he said, has held the view for decades that building in Judea and Samaria makes it harder to solve the Israeli-Palestinian conflict.

This is not the first time Biden’s pro-Israel bona fides have been questioned. He has also appointed certain advisers who are seen as unfriendly to Israel. Also raising eyebrows is his endorsement by the left-wing J Street, and his statements that he would reinstate the nuclear deal with Iran.

Biden has also said that he would  restore financial aid to the Palestinians even though they have yet to give up their “pay for slay” policy. This would run counter to American law according to the Taylor Force Act, which was passed to stop U.S. funding of groups engaged in terrorism.

Also not forgotten is that it was Obama’s administration in December 2016 that failed to veto a binding UN Security Council Resolution declaring Israeli settlements in Judea and Samaria to be illegal.

The Israeli government considered this a most damaging resolution. It was condemned by Israel and her allies. For example, John Bolton, a former U.S. ambassador to the UN, criticized the move in a Wall Street Journal op-ed at the time entitled “Obama’s Parting Betrayal of Israel.”